Common misconceptions, and the differences between the two

Doves and pigeons are well known and have large populations in many parts of the world. Yet despite how very common they are, there are many misconceptions about them. For instance; a common question asked is how does one tell the difference between a dove and a pigeon?

These animals belong to a family of birds known as Columbidae. This family of bird makes up 310 known species. From there, one could assume that pigeons make up some of these species, and doves make up the rest. This, however; would be a mistake.

While there are many species within the Columbidae family, the truth of the matter is that “dove” and “pigeon” are both interchangeable names that can be applied to any of the Columbidae species. There’s no official differences between the two.

This can cause one to wonder why both terms exist, and why people try to find some distinction between the two.

The two terms came into existence because of how common and wide-spread these birds are. Different parts of the world came up with different names for these animals. In Germany, the bird became known as the “dove,” while in France it was named the “pigeon.” Of the many names this animal has been given; these were the two that stuck.

While there is no scientific separation between the two, some parts of the world have come up with their own false distinctions between which Columbidae are pigeons and which are doves. To some, “pigeons” are the pest-like Columbidae that live within cities while Doves are the wild cousins of these birds that live in the forests.

Others say that pigeons are the larger Columbidae while attributing the smaller species as doves. As mentioned before, none of these distinctions are scientifically recognized.

While the generalizations of “dove” and “pigeon” serve no purpose beyond personal preference; there are still many different variations amongst the 310 species of Columbidae.

These animals come in a wide span of sizes, with much more variation than some would expect. For instance, the largest known Columbidae is nearly the size of a turkey; this being the “crown pigeon” species. 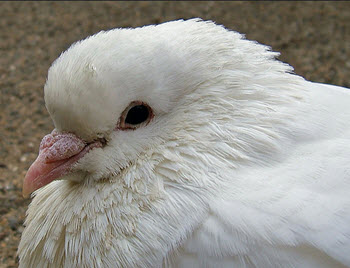 The smaller species tend to be better known and have more frequent interaction with humans.

On average, Columbidae tend to have short beaks and legs. Their small bodies are a big part of what allow them to live among people with such ease, since they can nest inside many human structures.

In addition to a wide variance in size, Columbidae also come in many different colors, or “plumage”. This has contributed to some of the perceived differences “doves” and “pigeons.” Some people view doves as traditionally being solid white, while pigeons have different colors for their heads and neck. Whatever the plumage, you can still use whichever term you prefer best.

Some of the plumage best known come in dull shades, such as gray, white and brown. However, there are also many species of Columbidae that come in much brighter colors.

Columbidae live among humans to such extent that they are viewed as pests in some parts of the world. They tend to find easy homes living amongst people and often construct nests in human structures such as large signs, gutters and roof tops. Large cities often have an influx of pigeons.

Of course many Columbidae also live in the wild. The reason some species are drawn into cities in such large numbers is the abundance of trash in addition to potential nesting spots. Discarded food acts as food for Columbidae while solid pieces of trash can be used to build nests. Columbidae also have less natural predators in the city than they do in the wild.

Rather they live in the wild or in a city, Columbidae tend to build very basic nests. Their nests are soft and weak, built for bare-bones necessity from whatever materials they can find. Sticks, grass, hay and garbage with similar consistency of these materials are often used for nesting.

Columbidae usually have one or two eggs when producing offspring. Both the male and female help to raise their offspring, which are known as “squabs.” They usually reach maturity after one week to twenty-eight days, depending on the species.

It is not uncommon to see a large multitude of Columbidae families nesting together in close proximity. They fly together in large groups known as a “kit.”

Like many birds, the Columbidae forms the bulk of its ideal diet from either seeds, fruit or insects. The species of Columbidae tend to fall into one of two groups; those that feed primarily on the ground by way of seeds and grains and those that feed in trees on fruits and insects.

Columbidae tend to act more commonly as scavengers than hunters. There are a few exceptions however; as some species feed primarily on bugs and small reptiles.

Doves and pigeons living in cities are often given a wide variety of other foods as scraps, such as bread fries and chips just to name a few. Sometimes this food is given freely and sometimes it is scavenged out of garbage.

While this food is abundant, it is not necessarily healthy. Wild Columbidae living in cities can range from the impractically obese to deathly malnourished.

Columbidae have formed a close relationship with humans; sometimes it is greatly beneficial and sometimes deadly. Some species have flourished by living off human settlements, while other species have gone extinct from human interaction.

In fact, one of the most popular extinct species ever known, the dodo; was actually a species of Columbidae. The dodo was a dove/pigeon that was hunted into extinction.

While some species have populated to such overabundance that they are now viewed as pests, others are facing the same fate as the dodo and crucial steps will have to be taken to prevent their extinction.

Of the 310 species of Columbidae, nearly 60 of them are being threatened with eminent extinction.