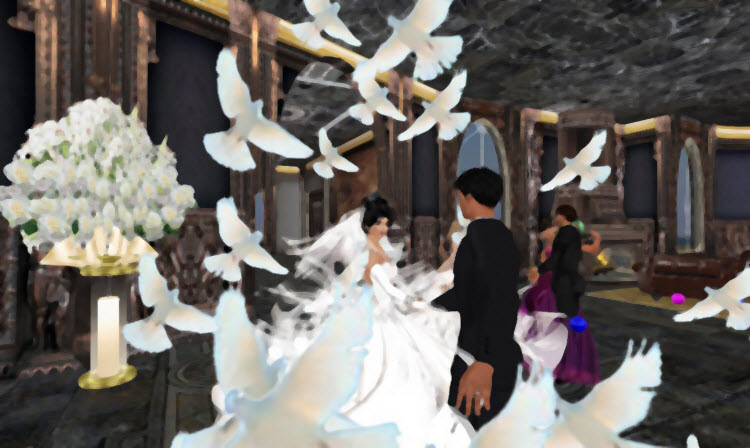 There is a certain type of domesticated pigeon commonly known as the “release dove.”

Release doves are used in ceremonial practice for things such weddings, anniversaries, birthdays and so-forth. Weddings tend to be the most common.

At the apex of the ceremony, such as when the bride and groom are ready to leave and start their new life together; the doves are released and fill the air in a grand display.

The doves are released one of two ways, hand release and flock release. In hand release, a few individuals hold one dove per person, and then let them go at the specified time. In a flock release, the birds are kept in a box in a larger group. The bride and groom will usually release one dove each, and then the rest of the flock is set free at once.

Similarities and Differences to Homing Pigeons

It could be argued that release doves are actually just a different version of a homing pigeon. In practice, this is essentially true.

The purpose of homing pigeons is that they can carry a message back a specific location by way of magnetoreception. Release doves play off of this concept. Rather than simply release one dove with a message, many doves are kept at the ceremony and are then released all at once. They perform their display by taking flight at the same time; and then return safely home. 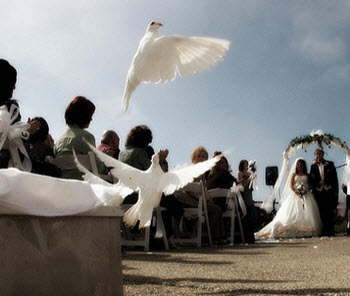 Even if the ceremony is being held far away, most homing pigeons can find their way home at distances of 500 miles. Some specimens have flown successfully at distances of 1,000 miles throughout history.

There are some subtle differences between traditional homing pigeons and release doves. Homing pigeons are prized primarily for their skill, so things like size and appearance tend not to be prioritized too highly.

With release doves, breeders want to keep their specimens at a uniform color for ceremonial purposes. Solid white doves tend to be preferred since they are commonly used at weddings, where white is the primary color scheme; to symbolize purity.

Release doves are also not trusted with distances quite as long as traditional homing pigeons. A single homing pigeon that has been shown to be a pro at navigation can be trusted with a very long distance. But if you are releasing dozens of doves at once, not all of them are going to be of the caliber that can tackle 500 mile distances with ease.

Most companies that rent release doves will limit how far away the ceremony can be from their facility. Most will ask that the ceremony be within 50-100 miles of the “homing-point” or else they will not be able to rent the doves.

Hire Professionals and Do Not Use Wild Doves

Hiring professionals is the most humane way to perform a dove release. They know how to transport and handle the doves safely. By renting professional doves, you also know for certain that they have been trained to return to a specified home-point.

It is not advised to capture and release your own doves, or to hire a company that does not use trained homing pigeons.

When released from the box, any pigeon, domestic or wild; will fly off in this desired spectacle. The concern is what happens to the pigeons; after.

Once release, homing pigeons will return to their masters. Wild doves will scatter. They will be in a new area that they are not familiar with and will not be able to return home since they were not bred and trained as homing pigeons. Most wild doves released this way will end up getting lost and starving.

Wild doves or doves that have not been trained properly will also tend to be more aggressive both with humans and with other doves they are kept in a box with. Hiring trusted professionals is not only the more humane option but also the more practical.

Some dove release companies will also not rent their doves under certain weather conditions.

If you are unable to find any professional release dove services in your area, it is best to not have a dove release ceremony at all. If doves are not available, you could consider having a balloon release ceremony, instead.